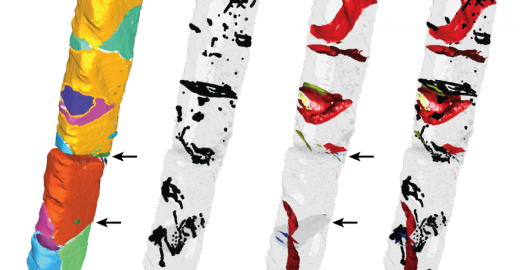 By using a combination of LabDCT, attenuation-based tomography and electron microscopy, a group of researchers headed by assistant professor Ashwin Shahani from University of Michigan have investigated the correlation between grain boundaries and impurity particles in polycrystalline silicon (poly-Si). These parameters are critical for the performance and efficiency of photovoltaic cells.

The study revealed that the location of the impurity particles is non-random in the bulk and strongly dependent on grain boundary character. The correlative analysis not only demonstrates the degree of interaction between foreign metal impurities and structural defects in poly-Si, but also highlights the viability of LabDCT.

Recent advances in the GrainMapper3D software enables the measurement of grain centroid, volume, orientation, and – as a new feature – shape. From this crystallographic information, the five-parameter grain boundary distributions in poly-Si were extracted.

The developed correlative workflow bridges the gap between different imaging modalities, provides a more unified description of the microstructural landscape and emphasises the potential for non-destructive materials diagnostics directly from the home laboratory.