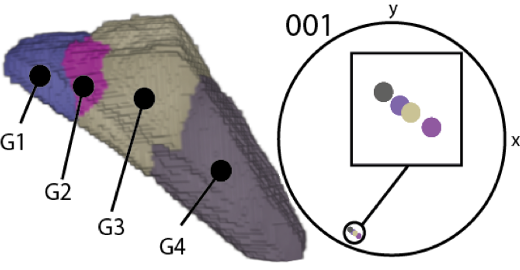 Olivine is the dominating mineral in the earth’s upper mantle – the first layer beneath the surface crust. It is also common in some extraterrestrial meteorites and holds promise for carbon dioxide sequestration through mineral reaction. Overall an interesting and exciting geological material.

Revealing the crystallographic orientation of the orthorhombic olivine in naturally occurring rocks provides insight for geologists to mantle flow and the formation of rock bodies.

In their pursuit of a non-destructive method to determine grain size, shape and crystallographic orientation of olivine, a group of researchers headed by Matthew J. Pankhurst from ITER and INVOLCAN, Tenerife, Spain, used LabDCT to scan fragments (~50 to 300 μm in length) of olivine. The successful application of LabDCT to olivine opens up new avenues for olivine research and, by extension, for further applications within mineralogy and geoscience.

The reconstructed grain maps revealed that the concentration of low angle grain boundaries in the olivine shards was substantially higher than for a material of random texture. Mantle flow produces crystallographic preferred orientation in olivine, while the strain state during mineral formation affects the spatial distribution and crystallographic orientations of the olivine sub-grain boundaries, which tend to form perpendicular to the foliation (layering) direction of the rock. As an example, the above image shows four sub-grains within one fragment of olivine for which the grain boundary misorientation angles vary between 0.54 and 1.65°.