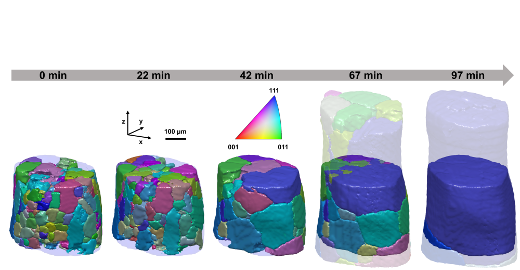 A group of researchers headed by Prof. Ashwin Shahani from University of Michigan set out to better understand the dynamics of this unwanted and unexpected process. Through LabDCT they were able to capture the evolution of grains in an Al-Cu alloy during five step of interrupted annealing at 485°C. This information was complemented with the distribution of particles measured by absorption contrast tomography. By integrating the results it was determined that larger grains were found in regions of lower particle density and vice versa. Once a grain in a particle-poor region develops a size advantage, it may grow to consume the entire sample volume. Based on the experimental observations, a novel analytical model was set up to predict and prevent abnormal grain growth conditions.